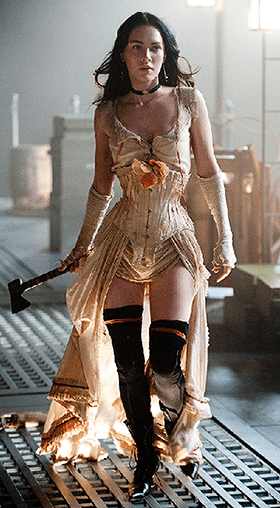 Is it historically accurate to show this much leg? Rule of Sexy says it doesn't matter.
Advertisement:

This is a skirt that wraps only partly around a lady's waist, thus making a crescent instead of a full circle.

While a regular skirt is designed to cover up the legs, and slit and wrap skirts cover the legs unless the lady moves right, this kind of skirt doesn't really cover the legs (unless you look at it from the right angle). The point is actually to frame and showcase the legs, while accentuating with the dramatic swoosh of a fine and lush skirt.

It should also be noted this trope could work with a simple dress or even a Pimped-Out Dress.

Florenz Ziegfeld is probably partially responsible for developing this style with his Ziegfeld Follies showgirls "glorifying the American girl" from the late 19th C and early 20th C.

The key to telling if a skirt is this is to look at the waist. The skirt has to wrap between 1/3 to 3/4 of the way around the waist to count. Anything less or more doesn't count (like Leia's slave girl outfit).

Usually a Sub-Trope of Impractically Fancy Outfit, and almost always a kind of Fanservice. Could also result from an Action Dress Rip if the "action dress" would normally have two skirts and the outer one looks like this. In more futuristic examples this can also serve as a distaff counterpart to the unbuttoning of a shirt or taking off a badass long coat because the underskirt is secured with buttons or ties that are easily undone. This is often used to reveal that the heroine or villainess is packing serious heat.

Note that plenty of historical gowns are actually designed this way. Those examples however, were of course meant to be worn over a skirt: and are actually more like a modern coat than they are like a modern dress. Like a modern coat, they were often optional while at home and a woman would be considered decent even without the gown on (depending on the exact time period). This made changing for various occasions and activities much easier, and also allowed gowns to be made of materials that would otherwise be impractically heavy (such as velvet, brocade, etc) since the woman never had to pick up the gown's skirt to run, go uphill or climb stairs. Plenty of women also took advantage of the fact that this double skirt design provided plenty of space for hiding small items: secret messages, ammunition, money, keys etc. Not so much actual weapons though.