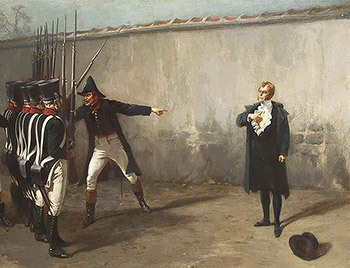 There is my dagger,
And here my naked breast; within, a heart
Dearer than Plutus' mine, richer than gold:
If that thou be'st a Roman, take it forth;
I, that denied thee gold, will give my heart.
—Cassius, Julius Caesar
Advertisement:

Usually seen with the character unbuttoning or removing a shirt, this trope involves a character baring a vital region of their body to provide an easy target and daring another character to stab or shoot them. In the same manner as a Shameful Strip, the removal of clothing signifies vulnerability and defenselessness.

In some cases, the character welcomes the injury, thinking it's deserved. Alternatively, they don't really believe the other will harm them, or are at least confident that the blow won't be fatal. Or they just want to Face Death with Dignity. Or it's a case of Strike Me Down with All of Your Hatred!.

May have some overlap with Battle Strip, in which a character disrobes for ease of movement, displaying badass credentials and possibly Fanservice; the display may be a kind of taunt directed toward an opponent before actual combat begins.