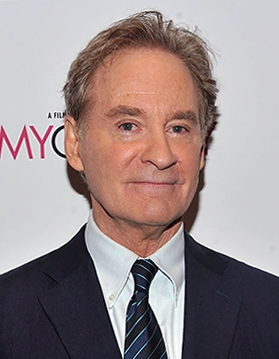 "Nothing makes an actor feel freer and more inventive and more creative than being trusted."
Advertisement:

Kevin Delaney Kline (born October 24, 1947 in St. Louis, Missouri) is an Academy Award-winning and Tony Award-winning American actor who has appeared in over 50 different movies during his career, and has also appeared on television and on the Broadway stage. His acting career began in 1972 as a member of The Acting Company, a touring theater company based out of New York City. Four years later, he left The Acting Company and began performing on Broadway. He went on to win Tony awards for Best Featured Actor in a Musical for the 1978 production of On the Twentieth Century, and for Best Actor in a Musical for the 1981 revival of The Pirates of Penzance.

Kline began doing movies in 1982, beginning with Sophie's Choice, in which he co-starred with Meryl Streep. During the 1980s and 1990s, Kline made several films with director Lawrence Kasdan, including The Big Chill, Silverado, I Love You to Death, Grand Canyon, and French Kiss. He would also go on to win the Oscar for Best Supporting Actor for the 1988 comedy A Fish Called Wanda.

In Hollywood, Kline has developed a reputation for being extremely selective about the parts he plays, leading to his earning the nickname "Kevin Decline". Film critic Roger Ebert coined the "Kevin Kline Mustache Principle", given Kline's tendency in the 80s and 90s to wear a mustache while doing comedic roles and to be clean-shaven for dramatic roles.

Since 1989, Kline has been married to actress Phoebe Cates (Fast Times at Ridgemont High, Gremlins) and has two children with her.

Works with pages on TV Tropes include:

This actor's work provides examples of the following tropes: