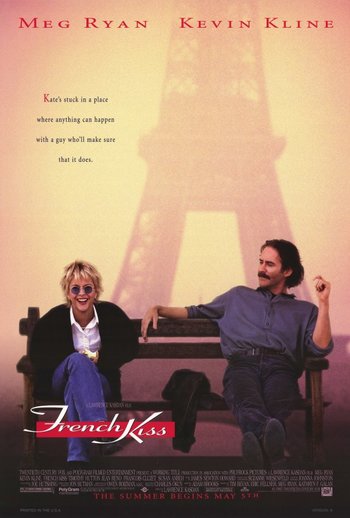 "Why weren't you the one, Charlie? The one who turned on the big shiny Kate-light that shines so bright?"
— Kate
Advertisement:

Kate (Ryan) and Charlie (Timothy Hutton) have a perfect life planned out before them: buying a house, marriage, kids, the whole works. Kate's fear of flying keeps her in Canada while Charlie goes to Paris for a medical convention. While there Charlie is smitten by the lovely Juliette (Suzan Anbeh). He calls off the wedding with Kate and she nervously boards a plane to get him back. She ends up sitting next to the petty French thief Luc Teyssier (Kline). He hides a stolen necklace and smuggled grape vine in her bag to get it through customs. Her bag is stolen, the necklace apparently lost, and Kate and Luc head to Cannes — Luc to find the necklace and Kate to get Charlie back. Along the way, Kate and Luc begin having feelings for each other — which change the course of their lives.