Film / Life as a House 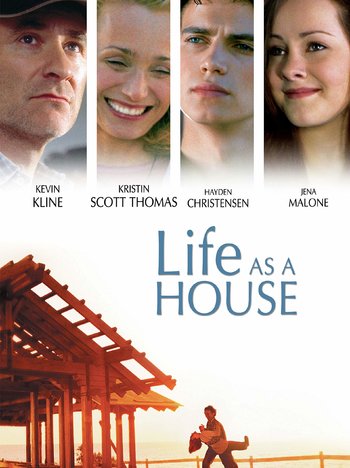 Life as a House is a 2001 American drama film produced and directed by Irwin Winkler with a screenplay by Mark Andrus.

After being fired from his job as an architectural model fabricator, George Monroe (Kevin Kline) discovers that he has advanced stage cancer and any treatment would be futile. George decides to demolish the home left to him by his father and spend his last days building a new house from the ground up, enlisting his estranged son, Sam (Hayden Christensen), to whom he has not revealed his terminal condition. In the meantime, George also reconnects with his ex-wife and Sam's mother, Robin (Kristin Scott Thomas), who decides to assist as well. Also joining in the construction are various neighbors, including Alyssa (Jena Malone), Sam's classmate who lives next door with her mother Colleen (Mary Steenburgen); and local policeman and George's childhood friend Kurt Walker (Scott Bakula).