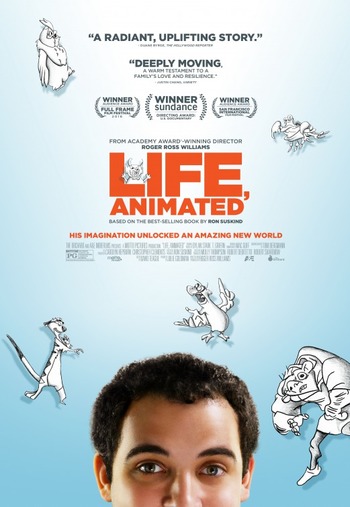 Life Animated is a 2016 documentary by Oscar winner Roger Ross Williams about Owen Suskind, son of Pulitzer-Prize winning author Ron Suskind (whom the best-selling book is the basis of the film) with High-Functioning Autism, and his love of classic Disney movies. It won the director award at Sundance.

At age three, Owen, who was so far having completely normal development, suddenly falls into a very deep form of autism. Soon, the only thing from his old life he still enjoys is watching animated movies, primarily films from the Disney Animated Canon. As the family is watching one of them, Owen's mother notices a resemblance between a set of sounds that Owen has been regularly repeating and a line from a scene to which Owen keeps rewinding. Not only this, but the line is strangely relevant to Owen's condition. From this, the rest of the family finds a way to communicate with him.