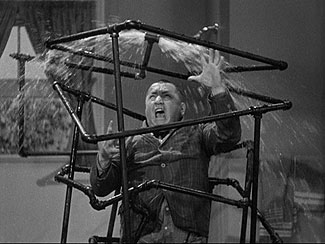 Sometimes even leaving it to the professionals doesn't work. So when the Stooges get involved...
"We repair what your husband fixed."
— Sign seen on a plumbing truck
Advertisement:

A leaky faucet is not only an annoying sound that keeps you up at night, it also wastes water. However, since most people don't feel this issue is urgent enough to justify hiring a plumber, they will try to fix it themselves. This usually results in a hilarious D.I.Y. Disaster.

Since this is Truth in Television, it's a staple of Sit Coms. A subtrope of Doom It Yourself.

Can also result in extensive property damage and, in extreme cases, a trip to the ER. Don't Try This at Home.