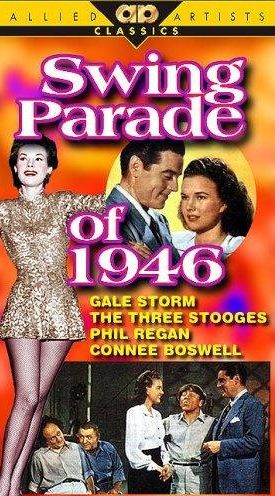 It tells the story of Carol Lawrence (Storm), a down-on-her-luck fledgling singer. One day, Carol - after several misunderstandings and after kitchen staffers Moe, Larry and Curly vouch for her - lands a job singing in Danny Warren's (Phil Regan) new nightclub. But Danny and his right-hand man, Moose are on the lookout for process servers sent by Danny's father (a newspaper man who considers the nightclub biz beneath Danny and a waste of time), looking to shut the place. Can Danny make a go of the place before his father can having him shut down? Will Danny and Carol act on their attraction to each other?

The movie also features musical numbers by Connee Boswell and the Louis Jordan and Will Osborne orchestras, as well as Storm herself singing "Stormy Weather" and "The Sunny Side of the Street."

It is available in its entirety in various places online and as a RiffTrax download.

Swing Parade of 1946 contains examples of the following tropes.