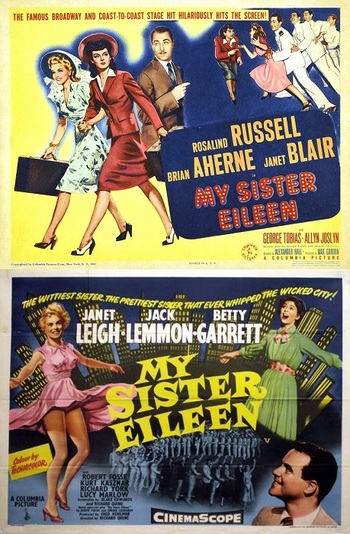 My Sister Eileen is a 1940 play based on a series of autobiographical short stories written by Ruth McKenney, originally published in The New Yorker and subsequently compiled into a book in 1938. It centers on two sisters from Ohio who are out to make successful careers for themselves while living in a basement apartment in the Greenwich Village neighborhood of New York City. Older, sensible Ruth aspires to be a writer, while Eileen dreams of success on the stage.

Eileen McKenney, the inspiration for the title character, and her husband, the novelist and screenwriter Nathanael West, were sadly killed in an auto accident just four days before the play's opening in December 1940. The original Broadway production starred Shirley Booth as Ruth and Jo Ann Sayers as Eileen.

The story eventually inspired many other works:

This stage play and its various adaptations include examples of: