Film / The Captain Hates the Sea 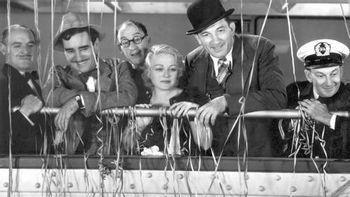 The Captain Hates the Sea is a 1934 comedy film directed by Lewis Milestone, set aboard a cruise ship (reminiscent of The Love Boat 40 years later) on a voyage to South America. Characters aboard the cruise include:

The Captain Hates the Sea was a flop for Columbia. It didn't do well at the box office, and the decision to film on an actual cruise ship instead of on sound stages meant the studio took a bath financially. It is best remembered today for being the last film of John Gilbert, a huge star in the silent era who saw his career swiftly collapse with the coming of talking films. Gilbert drank himself to death, dying a little over a year after the release of this film at the age of 36 from a heart attack brought on by severe alcohol abuse.