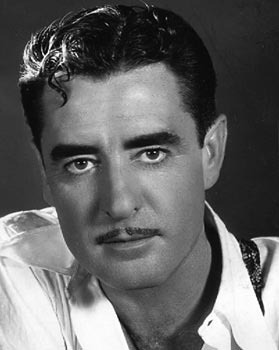 The man could work a mustache.
Advertisement:

Gilbert was born in Logan, Utah, to vaudeville parents who were neglectful and abusive. Eventually his parents settled in California, and by the age of 18 Gilbert was getting work as an extra in films. His first big break was a supporting part in Mary Pickford vehicle Heart o' the Hills in 1919. Gilbert started to get leading man parts in the early 1920s, and became a huge star after he signed with newly-formed Metro-Goldwyn-Mayer. His 1925 film The Big Parade, in which he plays a callow Idle Rich aristocrat who grows up through suffering in World War I, was a massive smash, probably the highest-grossing film of The Roaring '20s.

Gilbert continued to appear in hit films for the rest of the decade. He had a tempestuous romance with a newcomer from Sweden named Greta Garbo, whom he met on the set of Flesh and the Devil. The chemistry is very obvious onscreen. However, when talking pictures came in at the end of the decade, Gilbert's career went into a swift and terminal collapse. Mythology holds that his voice was too high for talking pictures, but in fact he had a pleasant baritone, as anyone who watches one of his talking pictures will see. The real reason was that his first talking pictures were awful and his acting was over the top, even by silent actor standards; the Singin' in the Rain scene where Gene Kelly kisses his co-star while proclaiming "I love you, I love you, I love you" over and over again was a parody of Gilbert's first talking film, His Glorious Night. (Later films like Downstairs showed that Gilbert had fully mastered acting in sound pictures, but by then it was too late.) Another reason for Gilbert's career tanking was that MGM chief Louis B. Mayer hated Gilbert with a passion, and started giving Gilbert more bad scripts after his first talkies failed.

Depression and stress over his failing career led to Gilbert becoming a raging alcoholic, which further damaged his reputation in Hollywood. His old friend and former lover Garbo insisted that MGM cast Gilbert as her co-star in Queen Christina. It wasn't enough, and Gilbert made only one more film before suffering a fatal heart attack at the age of 36, brought about by his drinking.

The decline of Gilbert's career was an inspiration for the George Valentin character in The Artist.