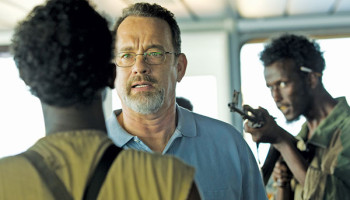 Somali pirates can ruin anyone's day.
"Look at me. I am the captain now."
— Abduwali Muse
Advertisement:

hostage situation, in which Somali pirates boarded and seized a freighter. It was directed by Paul Greengrass. Tom Hanks stars as the eponymous Captain Richard Phillips. It was highly successful critically and at the box office, with six Oscar nominations including Best Picture and Best Supporting Actor, and a worldwide box office take of $218 million on a relatively small $55 million budget.