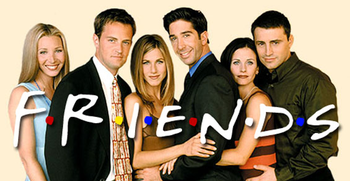 Six friends, more or less equal screentime.
"Depending upon which of these interesting characters you focus, the same incident will behave like the surface of the ocean, changeless yet ever-changing. In other words, there may be but one event but as many stories as there are people to tell them."
— Gustav St. Germain, Baccano!, "The Vice President Doesn't Say Anything about the Possibility of Him Being the Main Character"
Advertisement:

In most cases, the protagonist is a defining element of fiction. It is they whom the plot revolves around and, usually, the one the audience is supposed to empathize with most.

However, some shows decide to do something different—there is no one protagonist. The plot and its narrative don't revolve around a single, "most important" main character. Instead, it shares a cast of characters with (almost) equal screentime and importance to the plot. This is called an Ensemble Cast. This type of narrative is interesting because it highlights the relations between different characters by taking away the importance of a single character.

In addition, it allows the writers to focus on different characters in different episodes freely, without worrying about giving the main character not enough screen time.

On the other hand, it can also result in a work that lacks focus and drive. Something must unite the events other than the main character. Most of these works therefore fix on a restricted setting and stick to it like glue.

Rotating Protagonist is a subtrope of this. See also All-Star Cast for instances where putting a bunch of stars in the work leads to no one star getting the bulk of the focus. For villains, see Big Bad Ensemble.