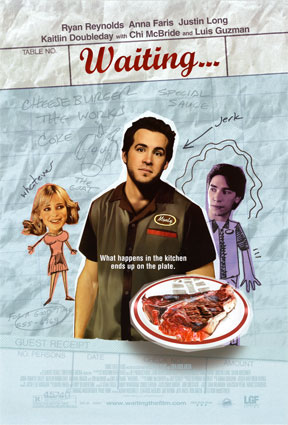 Just because they serve you, doesn't mean they like you...
Advertisement:

Meet Dean. Dean works as a server at a restaurant called Shenaniganz. This morning his mom told him about a guy he went to high school with who took all the same honors courses he did, and how this guy just graduated with a Bachelor's in electrical engineering. Cue the angst.

Meet Monty. Monty works as a server at a restaurant called Shenaniganz. This morning he found out that the 17-year-old hostess, Natasha, will be turning 18 in exactly one week. Since Monty is a proud pervert, he proclaims that he doesn't have much time left. But first, he has a special job today.

Meet Mitch. Today is Mitch's first day training as a server at a restaurant called Shenaniganz. During the film, we will follow Mitch around as Monty acclimates him to work at this restaurant. Which involves a lot of frontal male nudity. And for some reason, nobody will let him finish a single sentence.

Meet Calvin, who is working a double for a girl he likes, Raddimus and Danielle, a cook and a bartender who are having relationship issues, Naomi, a waitress with SEVERE anger management issues, and Bishop, the dishwasher/therapist/historian/Cloud Cuckoolander, and the other employees of Shenaniganz as they go through a Day in the Life.

Oh, and Dan. The manager.

Waiting... is a 2005 film starring Ryan Reynolds, Justin Long, Anna Faris, David Koechner, Luis Guzmán, and Chi McBride as the employees of a restaurant called Shenaniganz while they fight boredom and adulthood with their antics. The film depicts an only slight exaggeration of what working in a restaurant is like, as all restaurant employees will admit. Unless they have become managers.

A direct-to-video sequel entitled Still Waiting... was made in 2009. About half the principals of the first movie returned; they lost Ryan Reynolds, Anna Faris, David Koechner, and Justin Long (apart from an uncredited cameo which he later admitted to being "truly embarrassed" for doing), but added Adam Carolla.

After spending the entire movie not being able to get a word in, Mitch breaks his silence and breaks it hard.

After spending the entire movie not being able to get a word in, Mitch breaks his silence and breaks it hard.