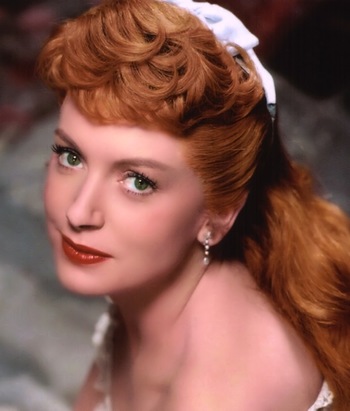 Kerr rhymes with star!
"For some strange reason, Americans think that ladies have no sense of humour. I don't know why that should be..."
Advertisement:

Deborah Jane Kerrnote (Rhymes with "star", but this doesn't stop people in Britain saying it so it rhymes with the "err" sound in "ferry". On top of that, current NBA coach Steve Kerr pronounces his last name to rhyme with "sir".) CBE (30 September 1921 — 16 October 2007) was a Scottish-born actress who was one of Hollywood's favourite redheads from the 1940s through the 1960s. Her success was pretty quick out of the gate, with well-received supporting roles in Major Barbara and Love on the Dole in her native UK. Teaming up with Michael Powell turned out well for her, with The Life and Death of Colonel Blimp and Black Narcissus helping get her the attention of Hollywood.

Her early years in Tinseltown were successful, but not in the way she would have hoped. Due to her I Am Very British way of speaking, MGM shoved her in various Costume Dramas and period pieces. She ended up typecast as an English Rose or Proper Lady — in what she mockingly called "poker up the arse parts". The film Young Bess was the last straw for her, and she nearly had her contract terminated. But luckily for her, Fred Zinnemann cast her in his World War II drama From Here to Eternity. The scene of her passionately kissing Burt Lancaster on the beach as the waves wash over them shocked audiences who were used to seeing her in corsets — and it helped show Hollywood her range. Although she would go on to play many more English Roses, she credited that with helping her get more varied parts.

She continued working in films until the 60s before abruptly quitting — appalled by the violence and sex of the day. She went back to the stage, appearing in the original production of Pulitzer Prize-winning play Seascape, and worked in a few television projects over there afterwards. In her career she amassed six Oscar nominations — for Edward, My Son, From Here To Eternity, The King and I, Heaven Knows, Mr. Allison, Separate Tables, and The Sundowners. She never won, but was presented with an honorary award in 1994. This was her official goodbye to Hollywood, and she enjoyed a peaceful retirement until her death in 2007.

Some films in which Deborah Kerr appeared include: