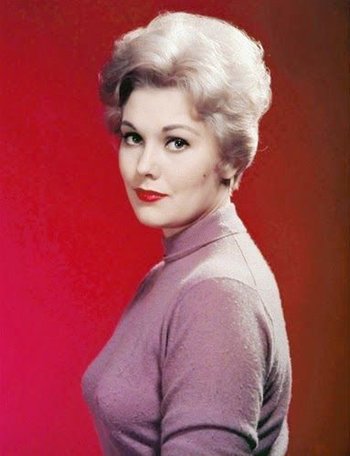 Marilyn Pauline "Kim" Novak (born February 13, 1933 in Chicago, Illinois) is a retired American actress who was one of the most popular Hollywood actresses of The '50s and The '60s, riding the Everyone Loves Blondes wave after Marilyn Monroe hit it big, though she managed to establish her own distinctive image and style.

Born and raised in Chicago, Novak changed her name from Marilyn to Kim to avoid confusion with the aforementioned you-know-who. While attending college she took a job with Thor Refrigerators as "Miss Deepfreeze", traveling around America posing alongside the company's products. While on a stop in Los Angeles in 1953, an agent discovered her and got her a contract with Columbia Pictures.

The timing was perfect. Columbia's top female star, Rita Hayworth, was starting to falter in popularity, and you-know-who had become a big sensation. Studio chief Harry Cohn decided to make Novak his version of Monroe. She made her debut in a bit part in The French Line (1954) and after a handful of films she finally had her Star-Making Role with Picnic in 1955.

After that Novak was a fixture in American pop culture. She worked with many of the top directors of the era, like Alfred Hitchcock, Billy Wilder and Otto Preminger. Despite her blonde bombshell image, she established herself as an actress who was equally at home doing drama or comedy, and was capable of bringing multilayered complexity to her characters, with some hints of Method Acting in her performances. She also had a reputation of being a perfectionist. She'd often pass up surefire hits for more challenging projects, and sometimes clashed with co-stars and directors.

By the mid-1960s Novak was burned out with acting, and started working more sporadically in films, preferring to focus on side projects like painting and poetry. As she approached middle age she shifted most of her acting to television, feeling that it was less demanding than film. After the Troubled Production of 1991's Liebestraum (Novak and writer-director Mike Figgis clashed virtually non-stop during filming), she retired from acting. Since then she's made occasional public appearance at screenings of her classic films or awards events (including as a presenter at the Oscars in 2014, though most of the talk afterwards was about her extensive cosmetic surgery) and she also gives interviews once in a while. She was diagnosed with Bipolar Disorder in her later years, and she's said that it was probably a big contributor to the instability of her earlier life.

Often viewed as a Poor Man's Substitute for you-know-who (indeed, many of her roles came in projects originally intended for Monroe), Novak's acting has been Vindicated by History. In particular, her performance in Vertigo has been praised as the key ingredient in that film's effectiveness.

She's reportedly been working on her memoirs since The '80s. She has a website

devoted to her work as a painter.