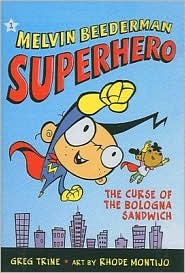 Melvin Beederman: Superhero is a superhero parody children's book series by Greg Trine and Rhode Montijo. It follows the adventures of a newly graduated child superhero named Melvin Beederman who is assign to protect Los Angeles from various criminals with his partner in un-crime, Candace Brinkwater.

This book series provide examples of: