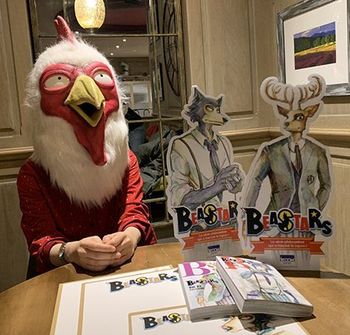 Paru Itagaki, creator of Beastars, chickens out of showing her face.
"Like his contemporary, Lewis Carroll, who wrote Alice in Wonderland, Kenneth Grahame was not a professional writer. And, like Carroll, who taught mathematics at Oxford University, Kenneth Grahame held a responsible position in the world of figures; he was the official acting secretary of the mighty Bank of England. And, again like Carroll, he sought to escape from this rigid, workaday life in a world of imagination and fable. Unfortunately for posterity, Grahame was a shy, modest kind of man, because, when the success of his stories showed every indication of turning Grahame into a popular celebrity, he promptly stopped writing them."
— Walt Disney, introducing his cartoon version of The Wind in the Willows
Advertisement:

The perception among some fans that as a result of Artist Disillusionment, some writers, artists, and other creative folk spurn public relations, interaction with audiences, signing autographs, and seem to hide behind their work. Maybe they just don't work well with public relations, maybe they prefer being alone and working quietly. It might also be due to:

Whatever the case, not everyone takes popularity well, after all. So, who can blame them when they want to disappear from the public eye?

A Reclusive Artist is one who is notoriously hard to find, who goes out of their way to avoid interviews and public appearances. This has examples that fit into two Logical Extremes:

Compare and contrast Hikikomori, The Hermit, Hermit Guru, Celebrity Is Overrated. If they only unveil a single masterpiece before dropping off the radar, they're a One-Book Author or One-Hit Wonder.

Filmmakers
Mangaka
Manga artists in general are usually shy or introverted and very protective about their private lives (either by shyness or by personal decision), and a number of manga artists don't even reveal their genders, often working under Pen Names that are gender-neutral. Unlike most comic artists, mangakas usually don't allow any pictures or photos taken, even in Japan.note Also, privacy laws are serious business there. This is usually enforced when artists go to any event outside Japan, and anime/manga licensors honor their requests, so it's very difficult (usually impossible) to see any photos or pictures of them, and the only way to get a picture is to do it illegally. Also, there are artists that don't want to be seen.

Generally averted with most older manga artists, especially those who were active in the 1960s and 1970s. Osamu Tezuka, for example, was interviewed many times during his lifetime, and he even made a few public appearances in America. Mangaka becoming reclusive mostly came later on.

Musicians
Poets
Pro Wrestlers
Puppeteers
Video Game Developers
Virtual YouTubers
This is the rule of thumb for Virtual YouTubers, for kayfabe is an integral aspect of Virtual YouTubing, and the resulting relative anonymity (and thus comparative safety from trolls, stalkers, and so on) is one factor that attracts performers to the medium in the first place. For that reason, this folder should largely list exceptions. Do not actually link specific "uncovered" information except in the cases where the Virtual YouTuber in question has made a public statement, as with the Kizuna AI example below.
Voice Actors
Other