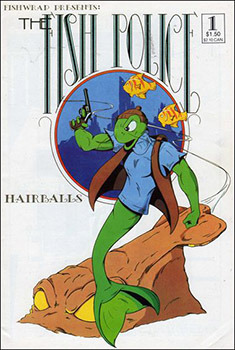 A black and white comic series created by Steve Moncuse in The '80s. The story centers on Inspector Gill solving crimes. The big one involves a drug called Hairballs, an organization called S.Q.U.I.D. and someone's niece being held captive. After that, things get kinda complicated.

Fish Police ran for its first 12 issues as a black-and-white comic under Moncuse's own Fishwrap imprint, which was also responsible for the first issue of Sam & Max: Freelance Police. Comico then picked it up, reprinting issues 1-4 in a trade, the rest in color, and running new issues (also in color) up to #17. Comico also printed Issue #0, a sort of rough draft of issues 1-5, and a special prequel issue, before going bankrupt. The series ended up at Apple for issues #18-#26, where it returned to black-and-white. Much later, Marvel Comics ran color reprints of issues 1-6. So at the very least, the beginning of the story is easy to find.

Many of the Comico issues included Guest Strips called Fish Shticks, still written by Moncuse but drawn by other artists (including one by Stan Sakai). After the original series ended, Apple ran six issues of original Fish Shticks. Moncuse did mostly inking and cover art for Marvel and Dark Horse Comics before retiring in 2000. He pulled Fish Police out of the vaults in 2011, when IDW Publishing approached him to reprint the first four issues, in their original black-and-white form, in another trade. Moncuse drew new art for the cover, and according to an interview

, decided to start a new series set 20 years ahead of the previous one. Nothing has come of the reboot, but in March 2013, he wrote a new Fish Police story for Dark Horse Presents issue 22.

The comic was loosely adapted into a cartoon for CBS in 1992, with John Ritter voicing Inspector Gill. It lasted six episodes, three of which never aired in the US.