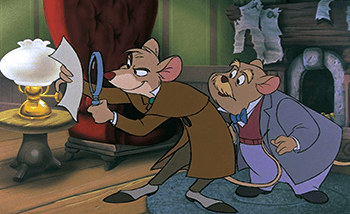 "Detective Hammer Logan III woke with a start, images of the bizarre bayou murder still fresh in his mind’s eye—a dame in trouble, body covered with bloody toothprints and saliva—but as sleep lifted, the grizzled detective remembered that he was a dog and the dame a coyote, so he spun on the bed three times and slept the rest of the day."
— Jacob Smith, Dallas, TX, The Bulwer-Lytton Fiction Contest 2016
Advertisement:

He may be the Funny Animal, the Intellectual Animal, or maybe even the Speech-Impaired Animal, but if there's one thing that he's incredibly good at, it's solving any kind of mystery that comes his way. He can be either a Hardboiled Detective, an Inspector Oblivious, or a Defective Detective. Whether he does it on his own, or with a friend, or with a group of humans, expect him to help solve the case with ease. This character may or may not work in a World of Funny Animals.