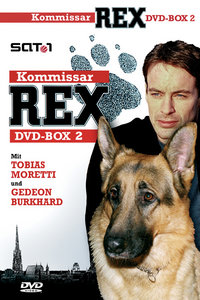 What's that, Rex? Timmy fell down the well?
Advertisement:

Kommissar Rex, known as Inspector Rex in English-speaking countries, is an Austrian live-action police detective series. The title character, Rex, is a highly-trained German Shepherd dog who works with a team of homicide detectives in the Austrian Kriminalpolizei, initially led by detective Richard Moser (Tobias Moretti).

The series originally ran from 1994 to 2004. In 2008 it was revived as an Italian co-production, with Rex being adopted by a visiting Italian policeman and going to live in Rome. Those Italian seasons lasted until 2015. It also produced a short-lived spinoff, Stockinger, in which Richard Moser's first sidekick is transferred to Salzburg.

Tropes pertaining to Hudson and Rex, a Canadian adaptation, may be found on its own page.