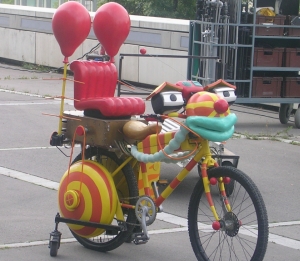 Long-running Austrian kids' show based on a long-running kids' book series. A talking bicycle named Tom Turbo can do "111 tricky things", including shrink, enlarge, see through walls, pop his head out like a jack-in-the-box for use as a weapon, and other weird stuff. So what does he do with all these abilities? He teams up with various kids and helps them solve mysteries and catch crooks. And we mean weird "mysteries", like a villain using the singing of a kidnapped chorus to summon a great treasure, or an evil toymaker who freezes people solid and tries to sell them. It's fantastical fare, and doesn't take itself very seriously.