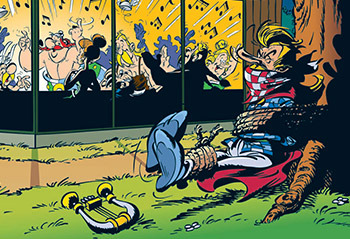 For want of a lyre, the party was saved!
"What's the matter, Gaggles? Can't talk cause you're gagged, Gaggles?"
— A Gra soldier to Gordin, Fire Emblem: Shadow Dragon
Advertisement:

When a Snooping Little Kid, Damsel in Distress, Faux Action Girl, or unlucky guy is captured by the villain, they're usually restrained in some fashion, and to keep them from crying out for The Hero, they're usually silenced as well. In the olden days, this was usually accompanied by some form of fantastical Death Trap to add to the suspense.

As technology marches around the 21st century, the victim's cell phone will invariably ring and the villain will pick it up and answer, "Sorry, she can't come to the phone right now ... she's all tied up at the moment." (Villains never get tired of this one. Never. EVER. In fact, there have been a few cases where the victim has said it to whoever is calling if she's somehow able to speak at the moment, although she usually needs a very good reason for it.)

To the captives themselves, they're likely to say "I Have You Now, My Pretty" or "You Got Spunk!" or some variation/combination of the two. Both of which usually inspire the Defiant Captive to be extra defiant.

Simple rope is popular among these villains. Others use handcuffs. Sedatives are rare unless the kidnapper uses it to do the initial nabbing. Some villains will invest in unbreakable chains made of Unobtainium to restrain a super-strong captive (and possibly forget that whatever said chains are bolted to isn't made of the same stuff) or possibly include a Power Nullifier.

Sometimes this is done for humor instead. For example, a character who is considered annoying might be tied up by the group simply to get that person out of the way. Other times, someone might be tied up humorously as the result of some mishap.

When this trope is played for dead serious drama, you can expect, in many cases, very dark lighting and only glimpses of the bonds. It generally tends to be more light-hearted adventures that actually show a lot of rope. In those cases, part of the fun is often seeing the hero escape, or try to escape, the bonds, so there's a lot of emphasis on showing the bonds, the struggling, and the escape or rescue. When it's played for drama, the emphasis is on how terrible the captive feels, so there's more focus on facial expressions and less on the bonds.

Depending on the means used, a rescue can lead to a Painful Adhesive Removal.

Binding and gagging is the most common of the many methods of restraint.

After saving Batman from the Joker's death trap, Catwoman is knocked out by Harley Quinn. Bound and gagged, she ends up on a conveyor belt in a cat food factory, only for the Dark Knight to come and save her.

Alternative Title(s): All Tied Up

After saving Batman from the Joker's death trap, Catwoman is knocked out by Harley Quinn. Bound and gagged, she ends up on a conveyor belt in a cat food factory, only for the Dark Knight to come and save her.