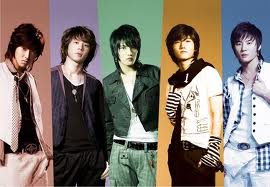 TVXQ! also known as Tong Vfang Xien Qi (Chinese: 東方神起), Tohoshinki (Japanese: 東方神起), or Dong Bang Shin Ki (DBSK; Korean: 동방신기) , is originally a five member Boy Band formed in South Korea under SM Entertainment in 2003. They later became extremely popular throughout Asia, especially in Japan. Notable for supposedly 1) having the world's largest official fanclub and 2) being the most photographed celebrities in the world. And, possibly because of their acapella background, DBSK is known as a Boy Band where every member can sing.

The group split up in 2009 after three of it's members sued SM over money and contract issues. The drama (a blog summary of the condensed version can be found here

) continues to this day. It's not really known how good/bad relations between the former members are but MBC - one of Korea's top television stations - staff freaked out once

over two of them filming around the same place at the same time.

Despite having split into two separate groups - JYJ comprising of Jaejoong, Yoochun and Junsu while Yunho and Changmin continue under TVXQ - they continue to do very well in album sales, and while the number of people in their fanclub has fallen, they are still at least two hundred thousand ahead of the second place.