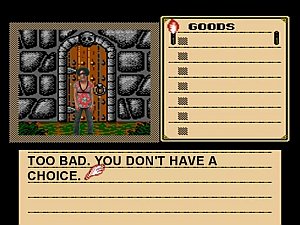 The Pixie really gets into Shadowgate.
Advertisement:

A video game reviewer who reviews both retro and newer games, both mainstream and indie.

The main feature of her reviews is the way she eventually either enters the game she's reviewing, or the game carries over into the real world. She sometimes enters the game to mock it (as occurs in her Shaq Fu review), sometimes interacting with the characters.

Other times, she imitates the game's features, such as in her review of Eversion, when the game's Dark World aspect carries over to the real world, and we see the Pixie and her world in both a "cutesy" version and a "dark" version.

The Gaming Pixie contains examples of: