Theatre / The Most Happy Fella 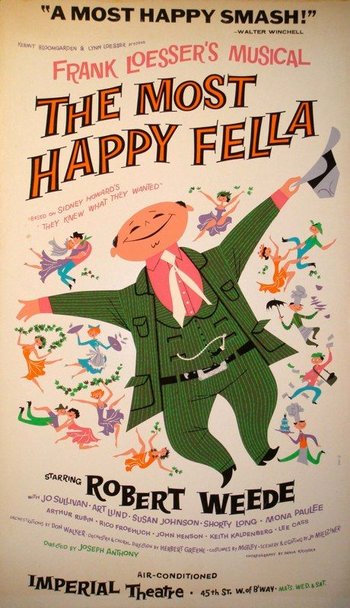 The Most Happy Fella is a musical in three acts with music, lyrics and libretto by Frank Loesser, based on the play They Knew What They Wanted by Sidney Howard.

The plot begins one January evening in 1927, when a middle-aged Italian grape farmer by the name of Antonio Esposito happens to dine at a restaurant in San Francisco. After closing time, one of the waitresses finds at her table a tie pin accompanied by a love letter written in broken English and addressed to "my dear Rosabella." Soon Tony and Rosabella are exchanging letters and photographs, but Tony is too shy to send a picture of himself and sends her instead one of his handsome young foreman, Joe. By the springtime, Rosabella leaves her home and job for Tony's ranch in the Napa Valley, where his neighbors and neighbors' neighbors have a big wedding party planned. The occasion is ruined by some unfortunate accidents, but despite their lasting consequences and over the unsatisfied objections of Tony's sister Marie, the marriage lasts.

The musical was first presented in 1956. A revival starring Giorgio Tozzi and Sharon Daniels was televised in 1980 by PBS.