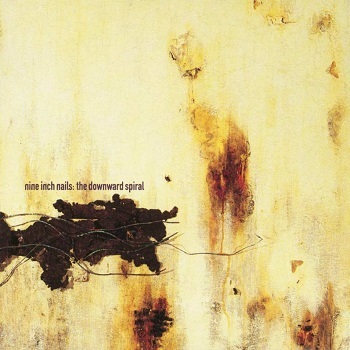 "I now know the depths I reach are limitless."
"You could have it all
My empire of dirt
I will let you down
I will make you hurt."
— "Hurt"
Advertisement:

The Downward Spiral, released in March 8, 1994, is the second studio album by American rock band Nine Inch Nails, and the band's first full work following their shift from a dark, mechanical take on synthpop and alternative dance (the debut Pretty Hate Machine) to a harsher, angrier industrial metal sound (the Broken EP).

The album was (in)famously recorded in a home studio that frontman Trent Reznor had built at 10050 Cielo Drive, dubbed by him as "Le Pig", where the Charles Manson "family" performed the Tate murders in 1969.note He ended up being the house's final resident, as he left at the end of 1993, taking only the front door to install at his new studio, and the house was demolished the year after.

Built as a Concept Album and heavily inspired by David Bowie's 1977 album Low, Reznor wanted The Downward Spiral both to distinguish its sound from Broken and tell the story of a psychologically wounded character on a path towards complete nihilism, misanthropy, and self-destruction. This character was based heavily on himself, as he was struggling with band conflicts, alcoholism, drug addiction, and depression around the time he made the album.

While working on the album, Reznor strived to focus on texture and space, avoiding explicit guitar or synthesizer use. He also strove to make certain parts of the album's story ambiguous, which has made it ripe for interpretation and analysis to this day. You can read one such interpretation here.

The Downward Spiral established Nine Inch Nails as a force in the 1990s music scene, its sounds heavily imitated and the album ultimately being seen as one of the most important musical works of the decade, although Moral Guardians did have quite a mouthful for some of the album's lyrics.

While touring for the album, Reznor ended up befriending its lead inspiration, David Bowie, who just so happened to be promoting his Rock Opera Outside, itself inspired by the industrial stylings of Nine Inch Nails. Bowie and Reznor combined their live shows together by making Nine Inch Nails' Dissonance tour the opening act for the American leg of Bowie's Outside tour, featuring Bowie and Reznor duetting on one-another's songs. Reznor would also provide remixes for Bowie's singles "The Hearts Filthy Lesson" and "I'm Afraid of Americans", co-starring in the latter's music video. Reznor would later cite this friendship as an influence in his eventual sobriety and Creator Recovery.

Just over a year after its initial release, The Downward Spiral received a remix album titled Further Down the Spiral that contains remixes from Aphex Twin, Rick Rubin, J.G. Thirlwell, and a good portion of Coil, among other high-profile names. It's reportedly one of the best-selling remix albums of all time. The album later received a 10th anniversary remaster in 2004, with both a standard edition and a deluxe edition that features a bonus discs with b-sides, remixes and soundtracks that the band made for films.

The pigs have won tonight.
Now they can all sleep soundly,
and everything is alright.