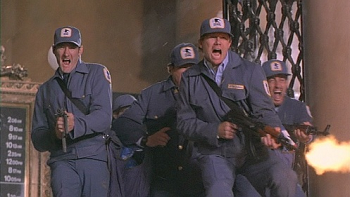 Someone stole our donuts and now you're all gonna pay!
"And this button-down, Oxford-cloth psycho might just snap, and then stalk from office to office with an Armalite AR-10 carbine gas-powered semi-automatic weapon, pumping round after round into colleagues and co-workers. This might be someone you've known for years. Someone very, very close to you."
— Narrator, Fight Club
Advertisement:

Some jobs are bad enough to knock a guy off his rocker. If one more person comes by and tells them to put the new TPS cover on the TPS report, they will go on a murderous rampage.

Real Life has more premeditated mayhem. In TV Land, the worker snaps on the spot and becomes an Improbable Weapon User, wielding something work-related, like a boxcutter, letter opener or something hefty to bludgeon with.

Named after a series of incidents involving U.S. Postal Service workers going on killing sprees dating as far back as 1983, and occurring most infamously in Edmond, Oklahoma in 1986 that has henceforth become a part of popular culture.

While Going Postal is strictly a work-related massacre caused by a disgruntled employee, it may involve elements of a Berserk Button, a Rage-Breaking Point, Beware the Nice Ones, Selective Enforcement or a combination of the four. Compare Axes at School.

For the Discworld novel, see Going Postal (which does not contain any examples of this trope).