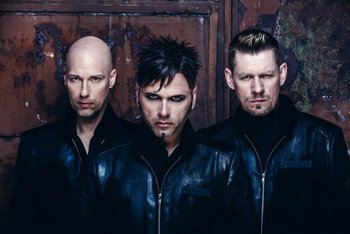 From left to right: Robert, Dero, Andreas
Oomph! (sometimes rendered OOMPH!) is an Industrial Metal band (even though their first album, Oomph!, was an EBM album) founded in 1989 in Wolfsburg, Germany, consisting of Dero Goi, Andreas Crap and Robert Flux. Their second album, Sperm, released in 1994, is widely considered the Ur-Example of Neue Deutsche Härte (or NDH, "New German Hardness"), a German subgenre of Industrial Metal with influences from EBM, featuring such bands as Unheilig, Eisbrecher, Megaherz, ASP and a certain little band that you may have heard of going by the name of Rammstein.
Advertisement:

Even though they were very influential, they didn't make their big mainstream breakthrough in Germany until 2004, when "Augen auf!", the first single from their album Wahrheit oder Pflicht, was #1 on the German singles chart for 8 consecutive weeks. Moreover, the success of Rammstein, whom they have themselves inspired, contributed to popularise NDH even outside the German-speaking public, and was indeed of help for Oomph! as well.

Ready or not, I'm troping: