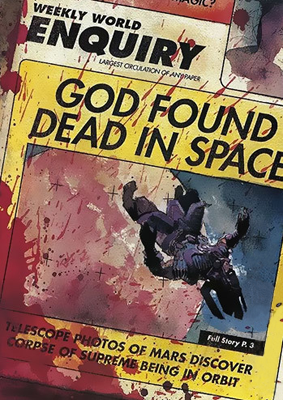 Let's hope we never find out who or what did him in.
"Gods, too, decompose. God is dead. God remains dead. And we have killed him."
— Friedrich Nietzsche, The Gay Science, Aphorism 125 ("The Madman")
Advertisement:

In the beginning, God created Heaven and Earth. Whether it took six days or six billion years for Him to complete the Creation, there's nobody to give the award plaque to. Why not, you ask? Because, somewhere along the way, God kicked the bucket. Answered the last prayer. Played the last game of skee-ball. Named the last prophet. He is an Ex-Deity!!

This is going a step beyond Have You Seen My God?; they've called off the search and alerted the next of kin. The Council of Angels is now running around trying to figure out who's in charge.

Note that this trope does not directly refer to Nietzsche's pronouncement, which, in one of the most serious debates in the academic world, implies that God and all God represents didn't exist to begin with. note The "death of God" according to Nietzsche is a crisis of faith caused by scientific progress: modern people began to increasingly rely on the scientific method and along the way realized that empirical science cannot prove the existence of what was assumed to be immutable truth: universal morals, a definite meaning in life and any sort of afterlife. In short, a more accurate summary of Nietzsche's argument would be "Philosophy is dead, morality never existed and science has denounced those as bullshit", but that wouldn't quite manage to convey the poetic severity of the message and his tragic view on the Enlightenment's pursuit of scientific revelations. He put it more expansively this way: "Belief in the Christian god has become unbelievable."

Thankfully, we don't need to dwell on grim philosophical intangibles to enjoy a story about the literal implications of the mortality of the divine. This trope can occur in either a monotheistic or a polytheistic setting; of course, the ramifications of a God dying vary in severity, depending on if there are many Gods or just one, whether gods are truly necessary for their respective domains of influence to keep functioning, and whether the position can be filled in some way or another.

Some people may be interested in trying to find the corpse or Pieces of God. Compare Götterdämmerung and Death of the Old Gods, which is the general end of the age of Gods, and Kill the God, wherein a (usually mortal) character destroys a God. Expect a certain amount of surprise should they succeed. Also compare Evil Stole My Faith, which is about a character's belief that there was no God to begin with; they don't necessarily have to be correct.

Not to be confused with Shinigami or The Grim Reaper, which are divine manifestations of the death principle (God Is Death), or Fallen Creator.