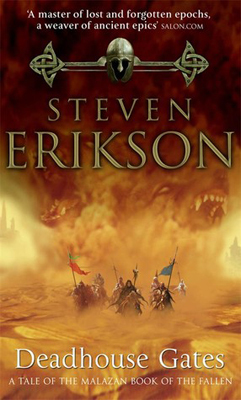 Deadhouse Gates is the second book of ten in Malazan Book of the Fallen, and the first in the Seven Cities arc. It was released in 2000, and is preceded by Gardens of the Moon.

Following the death of Adjunct Lorn in Darujhistan, the Empress has chosen Tavore Paran, sister of Ganoes Paran, as her replacement. Tavore's first act as Adjunct is as politically logical as it is callous: the noble houses of Unta are purged, and her younger sister Felisin with them. Felisin is shipped to the otataral mines as a slave along with the handless historian Heboric and the silent Baudin.

On the subcontinent of the Seven Cities, Dryjhna the Apocalyptic — the Whirlwind Goddess — has chosen a mortal prophet, Sha'ik. Religious fanatics are stirring up anti-Malazan sentiments, proclaiming that the Whirlwind, a religiously mandated uprising, is at hand. As historian Duiker finds himself on site, he witnesses as Coltaine, the newly-appointed Fist in the region, starts preparing his forces for the protection of the seemingly-inevitable exodus of Malazan civilians across the continent that will take place.

Elsewhere, the wandering duo known as Mappo Runt and Icarium find that a convergence of shapeshifters is going to take place soon. The amnesiac Icarium finds himself drawn as well, and the pair set off.

Oblivious to the troubles of the Seven Cities, Crokus and Apsalar, both free from their respective gods now, attempt to cross the Holy Desert Raraku, the sacred centre of the Whirlwind, on their way to Apsalar's old home. Two Bridgeburners, Fiddler and the assassin Kalam, are escorting them — but Raraku is a special place, and this is not the first time it has seen Bridgeburners.

Followed by Memories of Ice.