Cry for the Devil 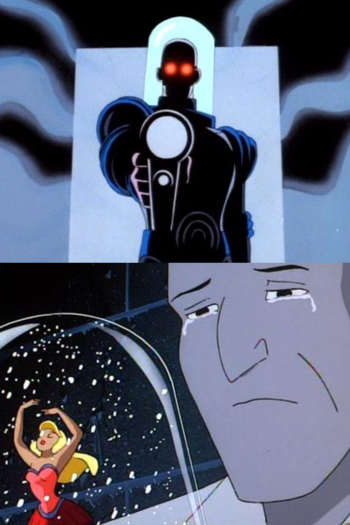 His heart isn't completely frozen.
"But who prays for Satan? Who, in eighteen centuries, has had the common humanity to pray for the one sinner that needed it most?"
— Mark Twain

The villain stands poised for victory; he stares out at the ensuing carnage — all is going according to plan. The audience, sure of his intentions and motivations, hates him, loathes him, wants him to die, and knows deep down that they have every right to.

The storytellers cut back to earlier days; a time of would-be happiness for a younger, gentler person: the villain in his youth. In a short time, perhaps a single quip, or a single, unnarrated action, we see it: the event that tainted, jaded, and turned a normal, loving person, perhaps even a hero, into an unforgiving villain. Suddenly, the audience slinks down; some cringe, others start to tear up — for all intents and purposes, a real-life Heel Realization.

The audience begins to see the bigger picture: evil isn't born, it's made. Everybody has a story, as the old saying goes, and a villain's story is often tragic. After a lifetime of rejection, dismissal, cruelty, and hate, who wouldn't become a villain? And when that cruelty comes full-circle back to the originators, why are they the victims? Finally, the biggest question pops into the audience's mind: what if? What if someone, even one person, had shown even an inkling of kindness or love to them? What if someone stood up for them? Love can change, right? Then couldn't it also prevent?

It's easy to hate, but it's hard to understand or forgive, especially when we're so convinced that we are in the right, until we get hit right in the face with the facts. At this point, one feels what can only be described as anti-schadenfreude, and when one's sympathy or empathy for a villain's position reaches its peak, that's when you Cry For The Devil.

This goes back at least to the 17th century; characters from all walks of life have been reexamined again and again, and often times, the worst, most evil villains make the greatest sympathetic, although still evil, protagonists. Put simply, humans are fascinated by what could turn someone to The Dark Side, most likely because we realize how easily we ourselves could, as well.

It's supposed to be a possible end-result of a Freudian Excuse done well. Frequently used to build the Tragic Villain. A particularly compelling version of this can even humanize a character, at least in the eyes of some fans. It will likely also turn the character into a Draco in Leather Pants for the fandom. Common keywords for pointing out the trope include something along the lines of "It's not really his fault he's evil, but..."

That being said, a writer should be very careful with this trope - if the villain is particularly, abhorrently evil and has already crossed the Moral Event Horizon, the attempt at woobification, and any subsequent attempts at a Heel–Face Turn, can end up feeling forced. In fact, if the reason for the villain's popularity was that the audience actively enjoyed hating them, then woobifying them can backfire because it removes what made the villain so beloved in the first place and, in turn, makes them feel like less of a threat. In addition, this trope tends to invoke A Million Is a Statistic for the sympathy accorded to their victims; it can feel frustrating when the author is chastising you for "judging" a character who just got finished nuking a city full of innocent people, gleefully cackling all the while.

Alas, Poor Villain is a subtrope where this happens as the villain dies or has some form of downfall.

Compare Satan is Good, Sympathetic Murderer, Monster Sob Story, and Jerkass Woobie. Not quite the same as Sympathy for the Devil—that's when characters in story sympathize with a villain, not just the audience. See also the Sliding Scale of Idealism vs. Cynicism. Can overlap with My God, What Have I Done?. See also Unintentionally Sympathetic, when a character wasn't intended to be sympathetic, but is, in the eyes of the audience, anyways. Not to be confused with Devil May Cry, though it provides an example of this trope.

Since many of these examples end in a death — or, at least, a Fate Worse than Death — there are some spoilers ahead.

open/close all folders
Anime & Manga
Comic Books
Fan Works
Film — Animation
Films — Live-Action
Literature
Live-Action TV
Music
Pro Wrestling
Theater
Video Games
Even worse is that he wanted to kill himself but he was unable to. He tried to limit his evergrowing power at all costs and still failed. This lyrics of End of All (which his soul wrote) sum up his suffering: "Sing with me a song of silence and blood" "The rain falls but can't wash away the mud" "Within my ancient heart dwells madness and pride" "Can no one hear my cry?"
Visual Novels
Web Animation
Web Comics
Web Original
Western Animation