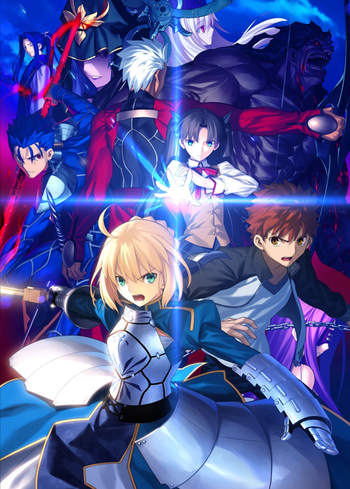 I ask of you: Are you my Master?
I am the bone of my sword
Steel is my body and fire is my blood
I have created over a thousand blades
Unknown to Death, Nor known to Life
Have withstood pain to create many weapons
Yet, those hands will never hold anything
So as I pray, Unlimited Blade Works.
Advertisement:

Fate/stay night is a Japanese Visual Novel H-Game developed by the company Type-Moon. Created by Kinoko Nasu with character design by Takashi Takeuchi, it was first released on January 30, 2004 for the Windows PC and serves as the first installment of the Fate franchise.

There exists a plane outside of human concepts, within which lies the Throne of Heroes. Here, the records of the brave men and women whose lives have become legends are kept, to be used as eternal guardians of mankind. When a legend has been venerated enough by humanity, it can become immortalized as a Heroic Spirit that surpasses time itself. However, the definition of what a "hero" is, is broad; even the ruthless and heartless are the heroes of their own tales.

"Heaven's Feel" is a magical ritual where seven Heroic Spirits are summoned to become "Servants" to seven "Masters". They must then fight each other in a seven-way battle royale, whereupon the last Master/Servant team remaining is granted the ultimate prize: the Holy Grail, a legendary artifact said to grant any wish of whomever claims it.

The Servants are divided among seven classes: Saber, Archer, Lancer, Rider, Caster, Berserker, and Assassin. As public knowledge of a Heroic Spirit's true identity would reveal their strengths and weaknesses, they are referred to by their class titles. Finally, each Servant is armed with a number of "Noble Phantasms": the armaments and abilities that personify their legend.

Shirou Emiya is an Ordinary High-School Student who happens to know a little magic from his late adopted father, a retired mage. When he stays behind at school one night, Shirou stumbles into the beginning of Heaven's Feel V, aka the Fifth Holy Grail War. The official rules state that all witnesses must be killed, but before that can happen Shirou finds himself bound to a Servant of the "Saber" class, widely regarded to be the most powerful of the seven.

With the aid of Rin Tohsaka, a rival mage who summons an amnesiac "Archer" Servant, Shirou learns the rules of the Holy Grail War and just how far its participants will go to have their wishes granted. His dream is to become a selfless "Hero of Justice", but just how much meaning does that carry in a tournament where one must kill or be killed?

Although never officially released in English, the game originally had a Fan Translation patch made for it by the good folks at Mirror Moon.

The visual novel was adapted for the PlayStation 2, with the pornographic content excised, but adds lots of cool new stuff in its place. The PlayStation 2 version is subtitled Realta Nua and the extra content from this version can be implemented onto the original 2004 PC version with this patch

. A PlayStation Vita port of Realta Nua has been released in Japan on the 29th of November, 2012 with high-resolution graphics and three openings animated by ufotable. A version of Realta Nua was also released for PC in the beginning of 2011, with the three routes separated into individual downloads, as well as a port of the Vita version for iOS and Android in 2015. An English patch for Realta Nua PC can be found here

for those who want to play that version of the game as-is; however, the newest (and arguably most complete) English fan-translation project for Realta Nua PC is the Fate/stay night [Realta Nua] Ultimate Edition

project. The Ultimate Edition project features Mirror Moon's fan-translation, adds HD quality versions of the new openings (with the 2004 ones as an extra), updated high-resolution art from the Vita and mobile versions, the option to use the original or remixed soundtracks, 16:9 widescreen presentation, the ability to toggle and/or decensor the adult content as well as an optional mature content filter* (for scenes involving use of alcohol, graphic violence, and sexual non-pornographic content), implements the jumpback feature from the PlayStation 2 version, the interactive Endings Menu from the PlayStation 2/Vita versions, and combines the three individual routes of Realta Nua PC into a single game à la the original 2004 release.

Set in the Nasuverse. It is split into three routes. Although these routes can in theory be played in any order, it is generally recommended to follow the intended order as listed below:

In 2005, it received a (sort-of) sequel titled Fate/hollow ataraxia, and in 2006, a 4-volume light novel prequel titled Fate/Zero which was adapted into an anime in 2011-2012. For other derived and related media set in the same universe, see Nasuverse or Fate Series. A light novel prequel detailing events in Saber's life, Garden of Avalon, was written by Nasu and included in the bluray release of the Unlimited Blade Works anime.