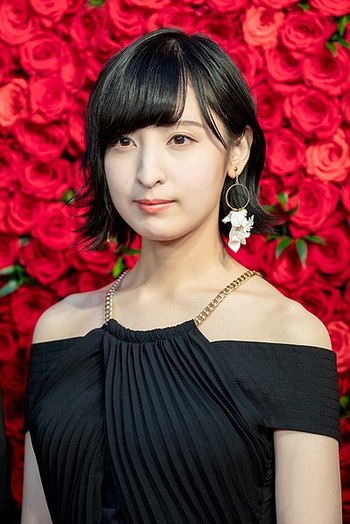 Ayane Sakura (佐倉 綾音), born in Tokyo on January 29, 1994, is an up-and-coming seiyuu. She's affiliated with the agency I'm Enterprise. Her break out role was as Merry Nightmare in Dream Eater Merry, and since then her roles are usually energetic girls and later on goes to voice Good Bad Girls. However, she has proven herself to be a versatile voice actress as evident with her roles in KanColle where she voiced a bunch of characters, from the high-pitched Shimazake to the deeper voiced Nagato-class battleships. She also has a nice singing voice and has had several Anime Theme Songs.

fan of Kana Hanazawa. Ironically, in some of her most notable castings with her, her characters despise Hanazawa's. However, she and Hanazawa have also starred together as sisters more than once.

Probably most famous for being the voice of Ochaco in My Hero Academia.

Not to be confused with fellow singer Ayane.

Ayane Sakura has worked on the following works: