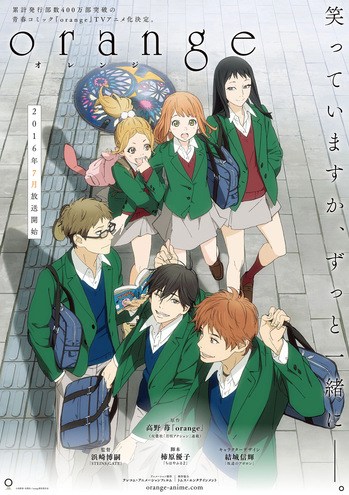 "Maybe it's impossible to live life without any regrets. Even when you know the future... you'll still mess up."
Advertisement:

Everyone develops regrets as they grow up. Sometimes it's about words left unsaid, or things left undone. Sometimes, it's about someone you lost on the way.

But, what if past could be changed, and that person hadn't ever left your side?

This is the situation Naho Takamiya has to confront the day she becomes a high school junior, when she receives a letter from herself... sent from 10 years into the future. The letter predicts everything she'll experience that day, including the transfer of Kakeru Naruse, an apparently lonely boy from Tokyo. The letter also tells that Kakeru will die in an accident, and that it's up to Naho to change the past and save him.

Orange is a shojo manga by Ichigo Takano. It started serialization in Bessatsu Margaret on March 2012, but after 9 chapters the author started having serious health problems and the series was left on hiatus for over a year. The author resumed publishing the series on February 2014, this time in the seinen magazine Monthly Action over an irregular schedule until the author was completely cured. Its serialization officially ended in August 2015 with a total of five volumes. After the main series ended, Takano has occasionally authored special chapters, some of them serving as tie-ins to the anime movie mentioned below, making up the contents of a sixth volume. 2019 saw to a more definitive end, announcing a seventh volume to complete the series.

The series is available digitally in Crunchyroll, while Seven Seas Entertainment is releasing the series in print in 2016

A Live-Action Adaptation was slated for December 2015, starring Kento Yamazaki (who also starred in the live-action adaptations of other shoujo manga such as Heroine Shikkaku and L-DK) as Kakeru and Tao Tsuchiya as Naho. A 13 episode anime adaptation by TMS Entertainment aired in summer of 2016, with a Compilation Movie+ titled Orange: Future (Orange: Mirai) and released in December 2016 serving as its author-approved epilogue. Funimation has released an English broadcast dub for this series, which began on October 24, 2016. Watch it here

Not to be confused with the animation studio of same name* Though it did work on the show.