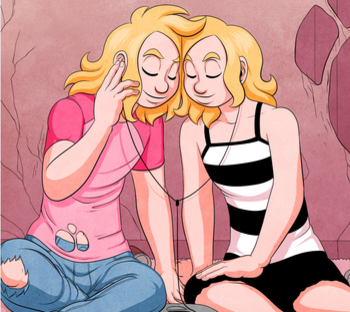 Peter Parker: I have a plan! Okay, first I'm going to sit next to MJ on the flight.
Ned Leeds: Uh-huh.
Peter: Second, I’m gonna buy a dual headphone adapter and watch movies with her the whole time.
— Spider-Man: Far From Home
Advertisement:

With the advent of in-ear headphones, one way that characters can be shown to have or develop an emotional connection is to have them listen to the same thing by each taking one of the earpieces. This can also be done with older, more traditional headphones via things like multi-port adapters, but earbuds are a far more common usage due to their ease and comfort.

Note that while this typically is used for a romantic connection between the characters in question, it can just as easily be a moment of friendship, emotional support, or maybe even a pick-me-up for one of the characters.