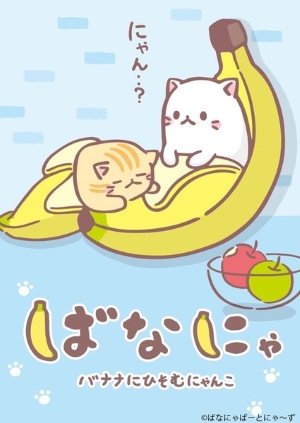 Cats hiding in bananas.
"Banana. The name given to large perennial plants of the genus Musaceae Musa, whose fruits are used for food. It's the very same sweet, delicious, nutritious fruit you all know and love. This is a story about the secret of bananas that nobody knows..."
—The Narrator
Advertisement:

Bananya is a Summer 2016 anime by studio Gathering based one of Japanese stationary company Q-Lia's cute mascots, a miniature cat named Bananya (combining the word "banana" with "nya", the sound a cat makes) who lives inside a banana. The Narrator claims to have discovered a species of tiny cats who hide inside bananas and only come out to play when humans aren't around, describing the results of his research.

In addition to Bananya we meet his various friends, such as Black Bananya, Tabby Bananya, Bananyako, Long-haired Bananya, Daddy Bananya, and Baby Bananya. Towards the end of each episode the Narrator opens the Bananya identification book and focuses on the personality of one of the characters. The show consists of thirteen three-minute shorts.

Discotek has licensed the series in the US, with the English dub narrated by Michael Toole.

Received a sequel series, Bananya And The Curious Bunch during the winter 2019 season.