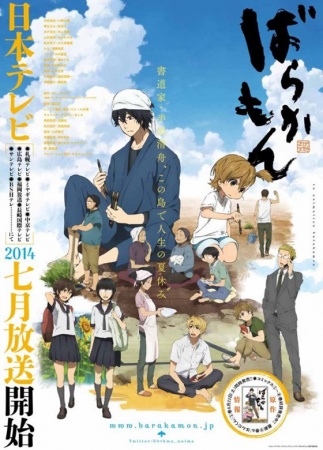 What does it mean to be "yourself"?
Barakamon, First Opening

Sei "Seishuu" Handa is a talented young calligrapher from Tokyo who ends up punching a curator who criticizes his work, and is sent by his father to the Gotou Islands in order to cool off. However, what was meant to be a time for Seishuu to contemplate things and work on his skills is soon disrupted by the friendly, gregarious islanders, who seem intent on getting involved in his life at every available possibility.

Barakamon ("perky/easygoing person" in one of the Gotou Island dialects note in reference to Handa himself, who is anything but ) is a Slice of Life manga by Satsuki Yoshino, which was serialized in Gangan Online from 2009 to 2018 and collected into 18 volumes. The story follows Seishuu (or "Sensei" as he soon becomes known) as he tries to get used to island life.

An anime for the series aired during Summer 2014 Anime season, which adapted chapters from the first five volumes.

There's also a prequel series titled Handa-kun, which centers around Handa as a high school student six years prior to Barakamon. It's more of a gag comedy, compared with the slice-of-life tone of Barakamon. The manga ran from 2013 to 2016 in Monthly Shonen Gangan, and it received an anime adaptation in the summer 2016 season. A second prequel series, Totodon, focused on Handa's father, Seimei Handa, when he was in his early 20s; it was originally published on the official Barakamon Twitter account and later compiled into a single volume with other illustrations first posted on Twitter.

Yen Press publishes both the Barakamon and Handa-kun manga in North America, while Funimation has the North American anime rights to both series.

Not related with that Baraka, a Digimon or a Digimon based of Baraka. 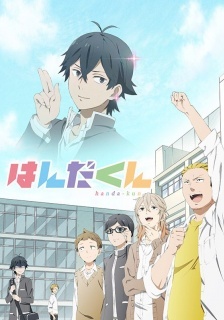