Trying Not to Cry 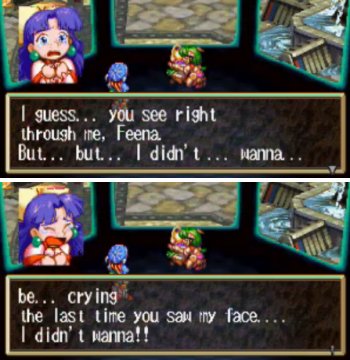 Neither did the players.
"So of course as a young boy, I'm sitting there thinking 'I'm tough. It's just a cartoon. It ain't gonna leave an impact on me. (Grumpy starts to cry) Oh no, not Grumpy. Not Grumpy, no he was the tough one! Not Grumpy, not Gr—oh there's no hope for humanity!'"
— Doug Walker on the funeral scene

in Snow White and the Seven Dwarfs
Advertisement:

Basically, it's trying to hold back any crying in a situation. The simple fact is that tears are often seen as a sign of weakness. Therefore characters hold them back to try to be strong, either to appear so as an example to others or because it's expected of certain people.

Now often people will fail at this because the grief is too strong for them to hold back, or because they reach a breaking point. Other times the grief may manifest in other ways if it's held in too long. Sometimes the grief can eventually be let out through Manly Tears.

One of the most common forms is if someone says "I promised myself I wouldn't cry".

Compare Sand In My Eyes, Men Don't Cry, Stiff Upper Lip, Rage-Breaking Point, He Will Not Cry, So I Cry for Him, Running Away to Cry. Contrast Ocular Gushers, Unable to Cry. Compare and contrast Prone to Tears.

Tip if you ever need to do this in real life: focus your eyes on an object or fixed point and stare at it as hard as you can.

Alternative Title(s): I Promised Myself I Wouldnt Cry