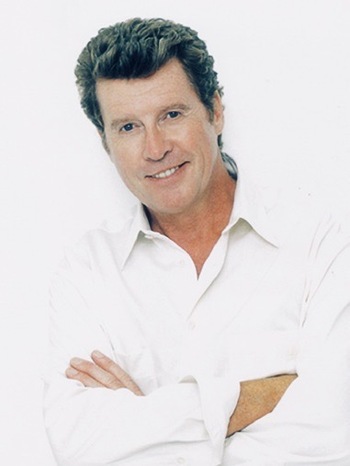 Chad: Have you ever seen Michael Crawford on a cereal box?
Troy: Who's Michael Crawford?
Chad: Exactly my point! He was the Phantom of the Opera on Broadway. Now my mom, she's seen that musical twenty-seven times. And she put Michael Crawford's picture in our refrigerator. Yeah, not on it, in it. So my point is, if you play basketball, you're gonna end up on a cereal box. If you sing in musicals, you're gonna end up in my mom's refrigerator.
Troy: Why would she put his picture in her refrigerator?
Chad: I don't know, one of her crazy diet ideas...
— High School Musical
Advertisement:

Michael Crawford CBE (born January 19, 1942 in Sheerness, England) is an English actor, singer and comedian who is best known for originating the role of the Phantom of the Opera in the musical of the same name in 1986.

He was born Michael Patrick Dumbell-Smith in Salisbury, Wiltshire, but a shuffling of family members as well as his mother remarrying lead to him being rechristened as Michael Ingram. However, his stepfather was angry and abusive, and after his mother died of pancreatic cancer he went to live with a family involved in stagecraft.

It was not until this time that he seriously thought of becoming an actor, as he had previously wanted to join the Royal Air Force (an aspiration he maintained well into adulthood). After joining a children's theatre group, he was advised adopt a stage name, as there was already another Michael Ingram in attendance. He thus came up with the name "Michael Crawford" after seeing an advert for Crawford's biscuits on the side of a lorry.

Since Crawford discovered his love of performing, he has acted in many mediums over nearly fifty-five years. Films (even working with John Lennon in How I Won the War), musicals, stage plays, television programmes (including his iconic role as Frank Spencer in Some Mothers Do 'Ave 'Emnote He famously performed all of Frank's pratfalls and stunts himself, including one up a clock tower which nearly killed him. He even did all his own stunts when he reprised the role for a Sports Relief special at the age of 74), radio plays — you name it, he's done it. But in The '80s he decided to add an audiography to his ever-expanding list. He cut his first record, Songs From the Stage and Screen, in 1987, undoubtedly inspired by being cast in Phantom in London the previous year.

His role as The Phantom caused a phenomenon often dubbed as "Michaelmania" towards the end of the 1980s, with many women (and some men) falling over themselves to see him live. He performed his last show in Los Angeles in 1991, after many awards, an appointment of the title of OBE and 1,300 performances.

Since then, his theatrical ventures have been something of a hit and miss, but in 2011 he was cast as the Wizard in the Andrew Lloyd Webber re-imagining of The Wizard of Oz, which he played until February 2012.

He now lives in New Zealand, in order to be closer to his family, and to cure his bout of chronic fatigue syndrome.

"It's over now, the music of the night."