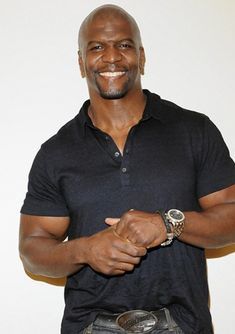 Terrence Alan Crews (born July 30, 1968) is an American actor, voice actor and former American football player. After several years playing pro football, Crews retired and pursued an acting career, which took flight on the big screen in the 2000s The 6th Day. Many film roles have followed, among them those in White Chicks, Idiocracy, The Expendables (2010), and its sequels and Bridesmaids. Crews has also found success on the small screen, having roles in Are We There Yet? and Arrested Development. He might be best known for playing Julius in Everybody Hates Chris and Lt. Terry Jeffords on the police Work Com Brooklyn Nine-Nine.

But his most famous work among the Internet users is a series of Old Spice commercials (directed by Tim & Eric), where Crews goes full Large Ham, proving that Awesomeness Is Volatile by appearing in more and more bizarre commercials. As an actor, Crews has undeniable comedic talent, which, coupled with his tough-guy appearance, makes him one of the most hilarious actors in Hollywood, but Terry has some serious roles to his credit, such as portraying a Scary Black Man in Gamer, giving one of the most chilling performances in his entire career.

Between 2016 and 2017, Crews gained another view on the net when he was seen appearing in Blizzard Entertainment headquarters, expressing that he loves playing their games, especially Overwatch and was hoping that he will become one of the voice cast members, in particular for the character Doomfist. He has given hints and questions if the fans want it to happen (receptions are positive) and also does mock-auditions for it.

Unfortunately, due to Blizzard's vision that the character is African and needed to have African VA, Crews did not get the role, but it already left a mark within the fandom of Overwatch. Though you may also notice that Doomfist does end up having a face and body build similar to Crews as a result.

AND REMEMBER: TERRY CREWS IS SO POWERFUL HE CAN APPEAR ON THE OTHER PEOPLE'S PAGES, BUT HE DOESN'T DO SO BECAUSE HE'S A NICE GUY!