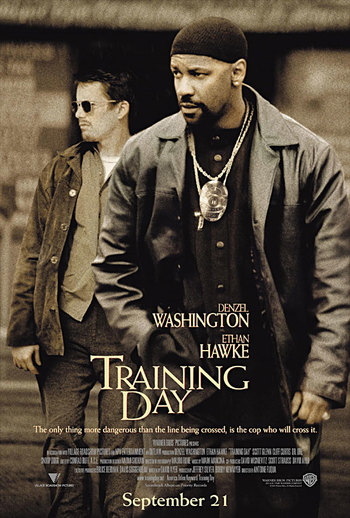 The film focuses on young and naive LAPD officer Jake Hoyt (Hawke), who is undergoing a single-day evaluation by the renowned and respected narcotics detective Alonzo Harris (Washington). Harris lets Hoyt step into his "office" (car) and takes him on a 24-hour ride through the drug-infested neighborhoods and gang territories of South Los Angeles. Hoyt is quickly exposed to the darker side of police duty, as he comes to realize Harris' methods make him not so different from the criminals he pursues.

Denzel Washington won the Best Actor Academy Award—making him only the second black man ever to win the award, following Sidney Poitier for Lilies of the Field nearly four decades earlier in 1963. Ethan Hawke was nominated for Best Supporting Actor.

A short-lived TV series adaptation, set fifteen years after the film, aired on CBS in 2017. In 2022 a Prequel film, Training Day: Day of the Riot, was announced. It will focus on Alonzo Harris during the 1992 Los Angeles Riots.