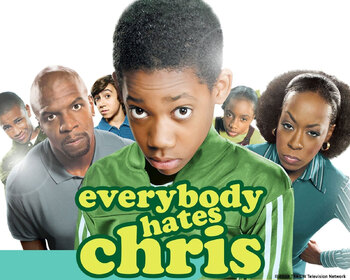 1982. That was the year I turned 13. Before I was a comedian, I thought the coolest thing that would happen to me was being a teenager. I was gonna have women, money, stay out late... I thought it was gonna be the bomb!
Boy, was I wrong!

Everybody Hates Chris is an American sitcom that is loosely based on the life of Chris Rock. Set in the 1980s, it revolves around the home and school life of Chris, featuring his easygoing, although money worrying, father Julius; sassy, if somewhat overreacting, mother Rochelle; younger brother Drew (who gets all the girls Chris can't); and "daddy's girl" sister Tonya. It also features the equally, if not more, hapless Greg, Chris's best friend and confidant from school. The series is also narrated by the humorous Rock looking back at his younger self, typically saying the opposite of what the younger Chris thinks.
Advertisement:

Chris and his family live in Bedford-Stuyvesant, colloquially known as Bed-Stuy, a primarily black and Puerto Rican neighborhood in Brooklyn. It is home to many comedic recurring characters, including the aptly-named black market dealer Risky, Jerome (who always asks "the little dude from across the street" (Chris) to let him "hold a dollar"), "Doc", owner of the local grocery store, and Mr. Omar, a womanizing funeral director and later tenant to Julius and Rochelle.

Chris attends Corleone Junior High, and later Tattaglia High School, where he experiences racism from students and staff alike as the only black student in the school. His friend Greg is also a target of bullying, though to a far lesser degree. Joey Caruso is the racist school bully who is, ironically, obese and short like some of his victims. Ms. Morello, his naive teacher who's attracted to black men, unintentionally makes racist remarks to Chris, who forces himself to ignore them or accept them as innocuous, while Rock comments on them. Rock later makes a cameo as Chris's guidance counselor.

Everybody Hates Chris contains examples of:

Chris fears this is what's coming to him if he tells his dad the truth about his car.

Chris fears this is what's coming to him if he tells his dad the truth about his car.