Series / The Facts of Life 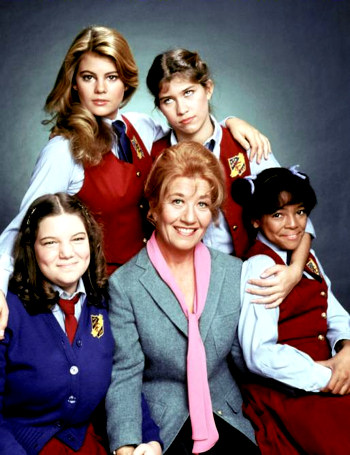 A sitcom (with some teen drama elements) on NBC from 1979 to 1988, about the heartwarming adventures of a group of female students. Initially they were students at a boarding school. In later seasons, they went to college and beyond, but kept living together under the watchful eye of Edna Garrett (Charlotte Rae), formerly of Diff'rent Strokes, and in later seasons her Suspiciously Similar Substitute sister, Beverly Ann Stickle (Cloris Leachman).

During its first season, the show had a large ensemble cast of seven girls, including one played by a very young Molly Ringwald. Starting in Season 2, though, the show was retooled. The cast was thinned down to four "core" girls, and almost nothing was ever seen again of their classmates. The canon reason for the cast change was that the four core girls were caught getting up to some illegal activities, and rather than expelling them the school placed them on probation by working with Mrs. Garrett in the cafeteria and sleeping in a spare room next to hers. Just go with it.

The main girls after the first season were:

The show aired long enough to use just about every Sitcom trope in existence, including Blair's Inspirationally Disadvantaged cousin Geri, who had cerebral palsy, and many Very Special Episodes. A reunion movie, featuring the entire cast except for Nancy McKeon's Jo, aired in 2001.

You'll avoid a lot of damage and enjoy the fun of managing The Tropes of Life. They shed a lot of light:

Tootie: Blair gathers information on every guy at Langley and then she rates them.
Jo: Kind of like hamburger meat. Prime, choice, dog food. So why are you throwing out your files? I thought they worked for you.
Blair: From now on, I'm on a computer. They're faster and I can exchange information with women all over the world.
Jo: Other women rate men the way you do?
Blair: Well, of course not as accurately. I prefer going to three decimal places, but I can use the standard 1-10 in a pinch.
Natalie: I like that. A woman who's flexible in her shallowness.
Beverly: This sounds awfully complicated. Of course, when I was dating, they only had Roman numerals.
Blair: Actually, it's quite simple. I just look at the height, weight, kind of car they drive, financial status, family background...
Beverly: That's more than I knew about my husband when I divorced him.
Tootie: Blair, how would you like it if men sat around rating you?
Blair: I'd love it!
Tootie: But it's so de-humanizing!
Blair: Not when you're a 10.
Jo: If you're a 10, I'd rate to see a 1.
Blair: Then avoid mirrors.
—-