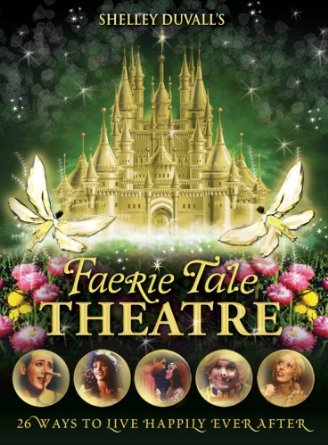 Faerie Tale Theatre (full name: Shelley Duvall's Faerie Tale Theatre) is an hour-long live-action children's anthology series created by Shelley Duvall. It aired on Showtime from 1982 to 1987, though it was actually produced over 1982-85. Showtime had a small subscriber base at the time, so it was also one of the first television shows that, with the exception of a Clip Show, was released episode by episode on VHS — many made their video debuts long before they aired on pay cable.

The show brings to life many traditional fairy tales, from standbys like "The Three Little Pigs", "Cinderella" and "Snow White" to more obscure ones like "The Snow Queen", "The Boy Who Left Home to Find Out About the Shivers" and "The Dancing Princesses". Some adaptations are Played for Drama, others are Played for Laughs; some are extremely faithful to the original stories, some are playfully loose. Many were directed by such luminaries as (then a mere upstart) Tim Burton and (then certainly well-known!) Francis Ford Coppola, and — owing to Duvall's professional and friendly associations with many major Hollywood performers — often featured an All-Star Cast.

Once available to view on Hulu, the series' entirety is viewable on YouTube.