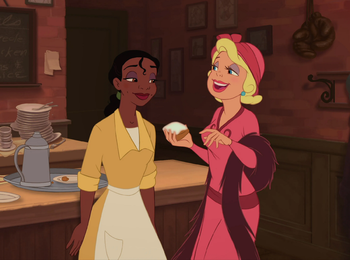 Interclass Friendship is when people are friends regardless of their vastly different social status. This is usually represented by a rich person being chummy with a commoner. However, a master-servant or employer-employee relationship is just as common.
Advertisement:

Often times the friendship will be vitriolic in nature due to the difference in upbringing. Expect the rich friend to be insensitive to the commoner's living and the commoner believing the rich to be snobbish.

A common plot involving this trope is that the poorer friend finds themselves in a financial crisis. Logic would indicate that it be an easy solution for the richer friend to give them money. However, the poorer friend would have too much pride to accept the offer and instead insist on earning their keep.

Another common plot is having the rich friend lose all their money and move in with their poorer friend. Hilarity Ensues as they learn what it's like to be "poor."

The romantic variant of this is Uptown Girl — or, if their class inexorably divides them, Star-Crossed Lovers. Might also be seen as the mundane version of Pals with Jesus. Friendships falling under this trope are often an Odd Couple and may be subject to weird looks from other people. If the reason the two characters are friends is that they went to the same school, it becomes School Forced Us Together. The rich character is usually Nice to the Waiter, though sometimes this is only the case with that one particular friend.