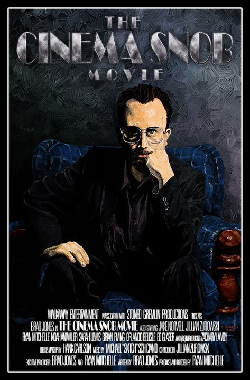 Also known by its working title of Smut.
Advertisement:

The Cinema Snob Movie is an origin story of Brad Jones' The Cinema Snob, and was released on DVD on September 27th. 2012. It focuses on Craig Golightly (Jones), a screenwriter desperate to get his blacksploitation film Black Angus off the ground. But as it turns out, he and his friend Neil (Jake Norvell) need permission from the head of the local film club to film it, permission that is not forthcoming. Seeing no alternative, Craig attends the film club disguised as Vincent Dawn, a fellow Caustic Critic. Then suspicious murders occur with each member of the club being picked off like flies and Craig finds himself forced to solve them. Directed by Ryan Mitchelle (who also appears as the aforementioned head of the film club), the film also stars Team Snob regulars Jillian Zurawski, Sarah Gobble, Dave Gobble, Zach LaVoy and Brian Lewis, as well as Orlando Belisle, Jr. and Noah Antwiler.

A sequel, titled Another Cinema Snob Movie, was released on July 26th, 2019.

The cops share a little too much involving Arch's violated corpse.

Example of:
Too Much Information

The cops share a little too much involving Arch's violated corpse.