Fanfic / Nymph and the Corrupted Miraculous 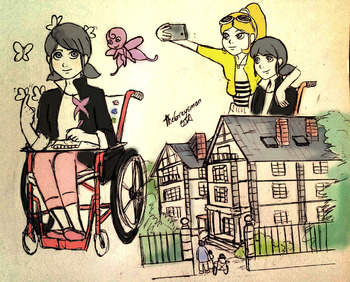 Marinette suffers an accident and is confined to a wheelchair as a result. One day, she encounters a butterfly-shaped brooch, awakens the Kwami inside it, and comes to the revelation her predicament can't stop her from being a heroine.

Meanwhile, someone steals the Miraculous jewels from Master Fu and corrupts them for their own twisted purposes. Master Fu is then forced to grant the remaining Miraculous to a new wielder.

The story can be found on FanFiction.Net here

and Archive of Our Own here

Nymph and the Corrupted Miraculous provides examples of: