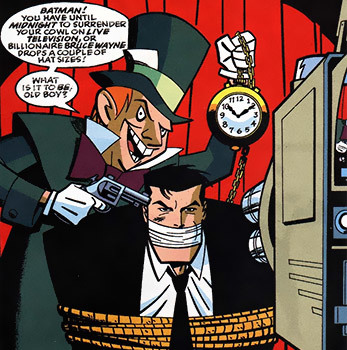 Batman would love to help, but he's a little tied up at the moment...
Miss Kitka: I think we are merely bait for Batman. Once he's in their trap, we'll be released.
Bruce Wayne: A slender hope, Miss Kitka. More slender than you can know.
— Batman: The Movie
Advertisement:

A plot in Superhero stories where villains take innocent hostages and use them as bait to draw out a specific superhero. There's just one difference from the standard Hostage Situation — the superhero's civilian identity is one of the victims. Now the hero must find a way to rescue the hostages, bring the bad guys down, and prevent anyone present, good and bad, from putting 2 and 2 together and figuring out that he and his alter ego are the same person. Obviously, he will, but the question is, how?

Subtrope of Restricted Rescue Operation. Compare Locking MacGyver in the Store Cupboard. Contrast Safety in Muggles. In some variations, the villain may specifically target the hero's "civilian" identity for kidnapping based on their apparent personal connection to the hero; see Friend of Masked Self. Also contrast I Have Your Wife, where the purpose of the kidnapping is to force the hero to cooperate with the villain. May overlap with Caught Up in a Robbery and "Die Hard" on an X.

Shadow Moth has Alya's friends and family captured in the hopes of luring out Ladybug and Cat Noir to steal their Miraculous. Unfortunately for him, one of his prisoners include Marinette.

Shadow Moth has Alya's friends and family captured in the hopes of luring out Ladybug and Cat Noir to steal their Miraculous. Unfortunately for him, one of his prisoners include Marinette.