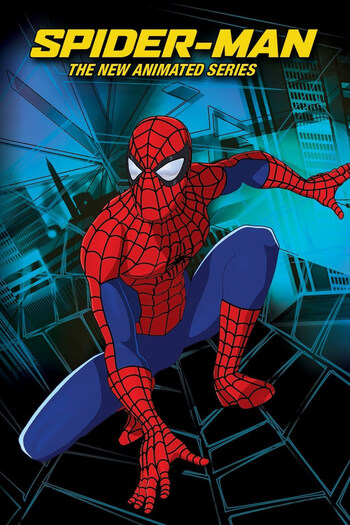 "Maybe I need an image makeover.... I'm... SPIDER-MAN!"
After the success of the first Spider-Man film, Sony and Mainframe Entertainment released Spider-Man: The New Animated Series as the first fully CGI show to feature everyone's favourite webslinger. It was released in 2003 on MTV, thus gaining the Fan Nickname of MTV Spider-Man.
Advertisement:

The series was initially supposed to be an adaptation of the Ultimate Spider-Man comics, but ended up taking place after the events of the first live-action film. It still had Brian Michael Bendis as a writer from the Ultimate series and the artistic style did harken slightly towards Mark Bagley's artwork, but ultimately it became its own thing.

Starring Neil Patrick Harris in the title role, the story of the show involved Peter Parker, Harry Osborn and Mary Jane Watson during their years in university. Harry is struggling over his father's death, Mary Jane has begun pursuing acting in the middle of her strained relationship with Peter, and Peter is doing what he is usually forced to do; juggle battles against supervillains with his personal life. It's somehow darker than your usual Spider-Man series, and mature as well. Shamefully, it's greatly overlooked.

The series was rather short-lived, at only 13 episodes. A second season was planned but never started. It would be the last Spider-Man TV series for a good number of years, until The Spectacular Spider-Man came along.

It's fanbase has grown over time, to the point a pair

unofficial revivals are being developed by a team of skilled and passionate fans.

Not to be confused with the series that inspired the name from this one, Spider-Man: The Animated Series.

It needs love on the character sections.